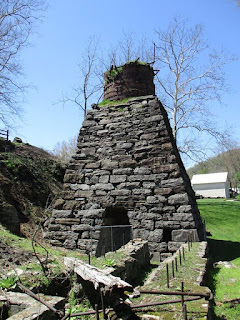 My bike and I came here today.

This structure at Foster Falls is called a cold blast iron furnace. Everything in the area was dependent on its use. It was the center of the area's economy.

Here's how it worked: In order to turn iron ore into iron (and later steel) the raw material had to be heated to melting temperature. To heat the ore timber was turned into charcoal* and was then used to stoke the furnace to 500 degrees centigrade (today plants use coke and "hot blast" to smelt iron ore; it's cheaper and far less labor intensive).

Required for production were (a) iron ore (hematite - iron oxide), (b) limestone, ** (c) heat (charcoal or coke), (d) water, and (e) air.
The water (diverted from the New River) was needed to turn a wheel that operated a huge bellows that forced air into the lower unit of the furnace.
Train car loads of iron ore were hauled in on tracks above and behind the furnace. Workers then wheelbarrowed the ore - mixed with limestone - to the stack at the top and shoveled the mixture in. Generally when the furnace was started it ran 24 hours a day, 7 days a week.
At melting temperature the iron ore (Fe2O3) separated into iron (Fe), carbon dioxide (CO2)*** and refuse (slag).
The melted iron flowed into molds that were located on the lower left side of the furnace, the slag flowed into a catch basin to the lower right.****
The iron ingots cooled and were put on railroad flatcars going to Pittsburgh, Cincinnati, and points beyond, where manufacturers used them for their various purposes.
This gives an indication as to why so many employees were needed in order to produce iron back in the day. Miners, limestone quarry workers (the quarries were mostly in nearby Austinville), lumberjacks, teamsters for the draft horses, railroad workers, and iron workers. That's not counting the auxiliary personnel - supervisors, mill workers where the timber was cut into logs ( the mill is still there and its interior is in such condition that it looks like the workers had just quit for the day.), distillery workers (they knew what kept the worker bees happy), general store employees (it's still there; I didn't get a photo), and hotel staff.

This is an old photo of the Foster Falls Mining and Manufacturing Company's iron furnace in its heyday.


In the foreground can be seen piles of timber hauled in to heat the furnace.


At its peak the furnace employed 90 men. 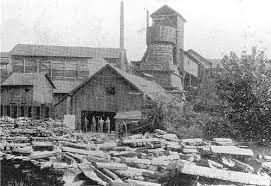 * The process that turned trees into charcoal was an elaborate process in itself. Trees were hauled in, sawed into logs, piled high and set on fire. Once the fire was going the logs were covered up with dirt and left to burn (airless) for up to a week. Charcoal was the end product. It required 2.5 tons of ore and 140.9 bushels of charcoal to produce one ton of iron. At its peak the furnace produced 12 tons of pig iron a day.

** Limestone was used in the process to bind with the impurities that were in the raw ore.

*** The bound byproduct - slag - was later used to line railroad beds (in lieu of gravel).

***** The cold blast process was found, over time, to be less effective than the hot blast smelting process that is in use today. Thus, all cold blast furnaces in the U.S. were gone by the 1920's.

****** The end product - pig iron - a poorer quality product, was used in the manufacture of such things as railroad car wheels. During the Civil War it was attempted to use pig iron for artillery tubes (cannon) by the Confederate government but testing proved that the barrels kept failing. 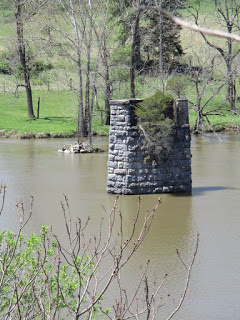 This photo gives a clue as to when the Foster Falls economy finally collapsed. It's a bridge abutment. In the 19th century the Foster Falls Mining and Manufacturing Company operated an iron furnace on the south shore of New River in Wythe County, Virginia. Most of the iron mines were to be found in the Red Hills area on the north side of the river. In order to get the raw product from Point A to Point B the mining company needed a bridge. Each day a train transported ore on flatbed cars to the furnace across this bridge just downriver from its smelting operation. In 1916 a horrendous flood swept away the center span of the bridge and operations ceased.  They were never started up again.
Posted by Jerry Fuhrman at 1:47 PM