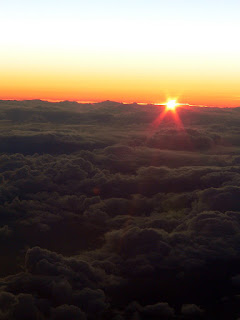 While I'm on the subject of flying, I wanted to mention the experience I had at 35,000 feet above the earth last night. Our plane had taken off from Greensboro, headed toward Atlanta. The sun had set by the time we had reached altitude but the western horizon was still aglow. The skies were clear except for a slight haze barely detectable off in the distance. It was a wondrous sight. One you can only find when you're soaring high above the earth.

A poem came to mind that I had seen displayed many years ago at the Air Force Museum near Dayton, Ohio. It is entitled, "High Flight," and was made famous by President Reagan in a speech to a grieving nation after the Challenger disaster in 1986.


Oh! I have slipped the surly bonds of earth
And danced the skies on laughter-silvered wings;
Sunward I've climbed, and joined the tumbling mirth
Of sun-split clouds - and done a hundred things
You have not dreamed of - wheeled and soared and swung
High in the sunlit silence. Hov'ring there,
I've chased the shouting wind along, and flung
My eager craft through footless halls of air.

Up, up the long, delirious, burning blue
I've topped the wind-swept heights with easy grace
Where never lark, or even eagle flew -
And, while with silent lifting mind I've trod
The high untrespassed sanctity of space,
Put out my hand and touched the face of God.

The author, John Gillespie Magee, Jr., a pilot, was killed - at the age of 19 - during World War II.