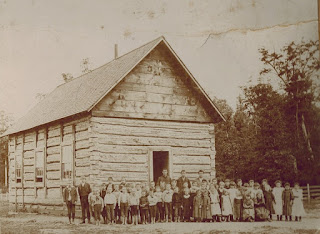 Here's a photo of the first school built in Shawano County, Wisconsin. The photo was taken sometime around 1920. The school was called the Kolpack Schule. It was built by German immigrants out of rough-hewn logs and German craftsmanship and was utilized for their burgeoning flock of German-American kids.
Lessons were originally taught in German. It was only when the school became part of the state's public education system that English was required.
You'll notice that most of the smaller boys - and a few of the girls - have no shoes. Resources were scarce back in the day.
My grandfather, Heinrich Emil Fuhrmann, attended the Kolpack School in the late 1890's.
My grandfather's sister, Louise Amanda Fuhrmann, married Otto Kolpack, a descendent of the builder of the school.
Although my father, Harold Heinrich Fuhrman, attended a newer school in the county he - like all his friends and neighbors - spoke only German in his youth, well into the 20th century.

Posted by Jerry Fuhrman at 1:22 PM